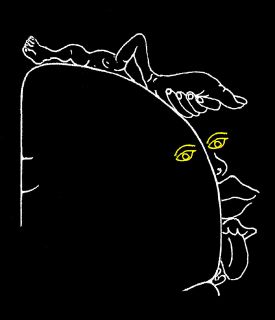 Our eyes relay a continuous stream of images to the brain. We are unaware of most of this input, because processing every detail would require resources that far exceed the available neural capacity. Attention is the mechanism by which the brain selects the most important features of the sensory streams and gives them a perceptual advantage.

A consistent observation in my experiments has been a change in the perception of visual stimuli when manipulating with the activity of the eye proprioceptive area in the postcentral gyrus  (Balslev, Gowen and Miall, J Cogn Neurosci, 2011, Odoj and Balslev, J Cogn Neurosci, 2013). The changes in perception are accompanied by changes in activity in the higher-order visual cortex  (Balslev, Siebner, Paulson and Kassuba., Neuroimage, 2012). These changes are likely to be the result of the manipulation of the oculoproprioceptive signal, because manipulation of this signal in the periphery, by passively rotating the eye, triggers the same changes in stimulus visibility (Balslev, Newman and Knox, Invest Opthlamology and Vis Science, 2012). These findings are intriguing because the somatosensory cortex is normally not associated with visuospatial attention. A role of this structure in attention however would explain a counter-intuitive observation.  An extension of the lesion into the somatosensory cortex is associated with a milder attention bias in patients with spatial neglect (Balslev, Odoj and Karnath, J Neurosci, 2013).

How are the eyes and attention coupled?

Another possibility is that the somatosensory cortex contributes an oculoproprioceptive signal that is a component of the attention representations elsewhere. This signal aligns the retinotopic space to the physical space.

The newest research from the lab (Odoj and Balslev, J  Cogn Neuroscience, 2016) supports the second hypothesis. After transcranial magnetic stimulation of the postcentral gyrus there is a consistent displacement of attention loci in the visual space relative to somatosensory cues. The shift is equal with in the shift in perceived eye rotation and cannot be explained by a mislocalization of the cues.

This research was funded by a Marie Curie fellowship for Career Development, a Research Grant from the Danish Medical Research Councils and a Institutional Strategic Support Fund at the University of St Andrews from the Wellcome Trust.

How can one study the role of the afferent signal from the eye muscles ?

It is very difficult to interfere with the sensory signal from the eye muscles (proprioception) in a controlled way. Until recently, the method used to dissociate the proprioceptive input from the oculomotor command in humans involved the application of a suction lens on the sclera to block the eye into a rotated position. Safety concerns obviously limit the use of this method.  Following up on the identification of the eye proprioceptive area by invasive recordings in the monkey, my experiments in healthy humans showed that repetitive transcranial magnetic stimulation (rTMS) over the somatosensory cortex alters the perception of one's own eye position and reduces the ability to correct for a proprioceptive perturbation (Balslev and Miall, J Neurosci, 2008). The innovative use of rTMS, which provides a safe and painless method to study the role of the eye position signals in behavior and cognition, was acknowledged with the Young Investigator Award at the University of Oxford/Magstim Summer School in 2010 . This research was funded by a postdoctoral fellowship from the Danish Medical Research Councils.

A mismatch between prediction and re-afference occurs not only during growth or after surgery of the eye muscles in patients with strabismus, but also in everyday life, for instance every time one applies a contact lens.  To dissociate the corollary discharge and eye proprioception in the laboratory, I use passive eye movement and repetitive transcranial magnetic stimulation (rTMS) over the eye proprioceptive area.  In such conditions with an acute mismatch between the two eye position signals, the abnormal proprioceptive signal can be measured as an error in locating visual objects relative to the body